With the start of Nagoya Castle construction in 1610, urban functions were relocated from Kiyosu, the center of the Owari region at the time, to Nagoya from around 1612. This led to the birth of the city of Nagoya.

The name "Osu" comes from "Osu Kannon," the Goddess of Mercy. In Keicho 17 (1612), as part of the Kiyosu Koshi, Osu Kannon was relocated from Gifu Hashima, an area prone to flooding, to its current location in order to protect the valuable books it owned. As a result, the Osu Kannon area became known as "Osu. 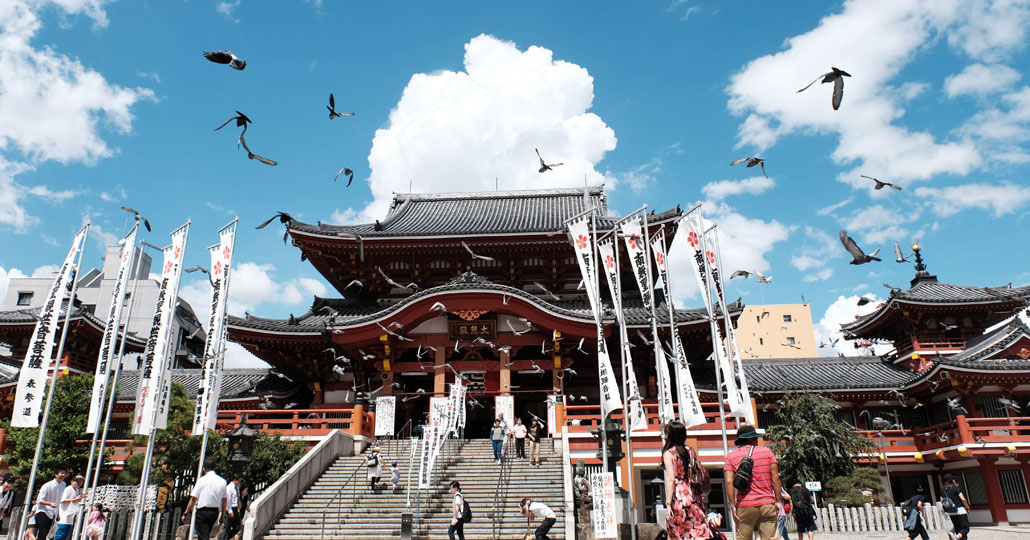 It is a separate head temple of the Chizan school of Shingon Buddhism and was founded by Shonin Noshin. The principal image of the temple is the Bodhisattva Sho-Kanzeon, created by Kobo Daishi. The temple name is Kitanozan Shinpukuji Hoshoin, but it is widely known as Osu Kannon.

It is a separate head temple of the Chizan school of Shingon Buddhism and was founded by Shonin Noshin. The principal image of the temple is the Bodhisattva Sho-Kanzeon, created by Kobo Daishi. The temple name is Kitanozan Shinpukuji Hoshoin, but it is widely known as Osu Kannon.

It was destroyed by fire twice, once in the Osu Fire of 1892 and again in an air raid during World War II, but was rebuilt in 1970.

Osu Kannon has a large number of valuable classical manuscripts, including the oldest manuscript of the Kojiki, "Shinpukuji-bon Kojiki," which is a national treasure, and is called "Shinpukuji bunko" (Osu bunko), and together with the bunkos at Ninnaji and Negoroji, are known as the three Honcho bunkos. It is said that Ieyasu decided to move the Osu Kannon to Nagoya in order to protect these classic books from flood damage. 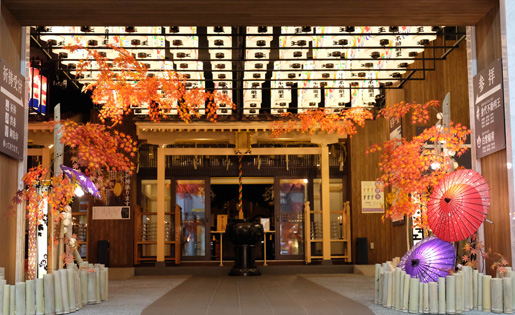 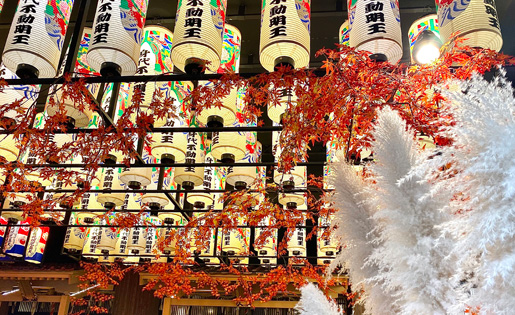 This Soto Zen temple was established in the 9th year of Tenbun as a family temple of the Oda family. The temple was founded by Nobuhide Oda, and its mountain name is "Kamegakurin" and its principal deity is the eleven-faced Avalokitesvara Bodhisattva. Originally founded by Nobuhide's uncle, Eizui Oun, the temple was built on the south side of Nagoya Castle, and at that time, it occupied a vast area of land near the current 2-3 chome of Nishiki and Marunouchi in Naka Ward.

It was moved to its present location when Nagoya Castle was built. As a red seal temple of the Owari Tokugawa family, it was a temple of great faith among the people, but gradually declined around the end of the Edo period. In the first year of the Taisho Era (1912), the abbot at that time, Kakunori Oen, opened up a large portion of the nearby forest (near the current Osu 3-chome area) that he owned, and Banshoji Temple once again regained its liveliness.
On March 12, 1945, Nagoya was destroyed by fire in an air raid, but during the postwar reconstruction period, Inari-den and Fudoden temples were built. The main hall was rebuilt in 1994, and in 2009, an ossuary hall with the latest technology was completed, attracting attention as a high-tech temple. 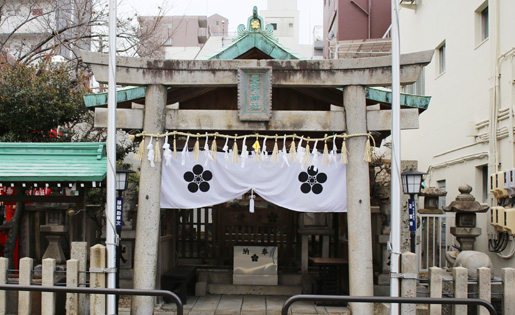 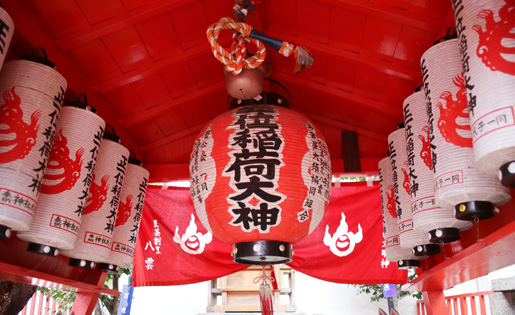 The name "Osu" comes from Osu Kannon, which was originally a jingu-ji temple part of Kitano Shrine; in 1324, by the order of Emperor Godaigo, Kitano Tenmangu Shrine was built in Osu, Gifu Prefecture. It was relocated to its present location along with Osu Kannon during the Kiyosu Goshi.

The god of worship is Michizane Sugawara. There is a statue of a reclining cow in the precincts of the shrine. Since Michizane cherished the cow, it is considered to be a messenger of Tenmangu Shrine and is cherished in the Tenjin faith. 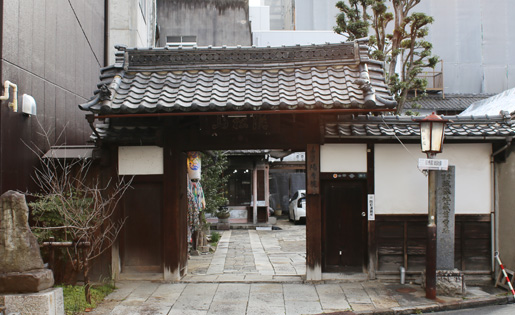 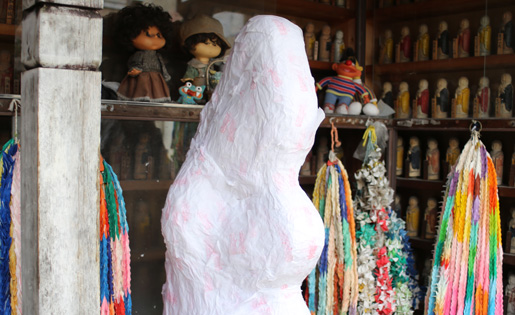 Also known as Osu Akihaden. It has been at its present location since the beginning of Kanei era, and folk beliefs are said to have flourished since the Tempo era.
The Paper Jizo is "a Jizo who protects people from suffering and listens to them when they put a piece of paper over their bodies and ask for help. Two sheets of white paper are sold for 10 yen, and water is poured over the paper with a ladle and pasted on the body. It is believed to be beneficial if you put it on the same area of your body where you have something wrong. 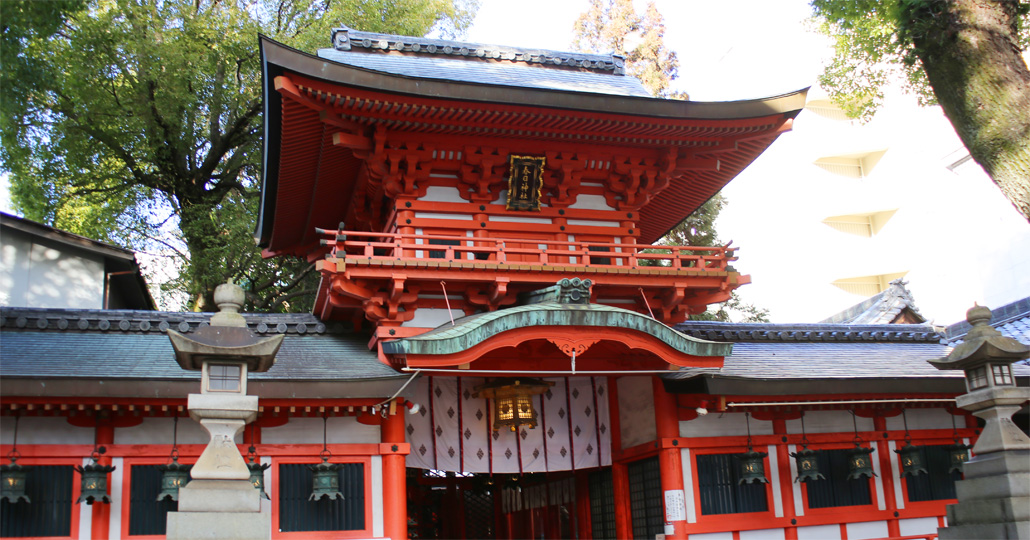 It was built in 947 by inviting the spirits of four great deities from Nara. It is a rare shrine in Nagoya City that has the Kasuga Taisha Shrine in Nara as its head shrine.

There used to be a shinoki tree in the precincts of the shrine that was believed to be beneficial for healing illnesses, but it was lost along with the shrine pavilions due to war damage. The shrine was rebuilt in 1959. 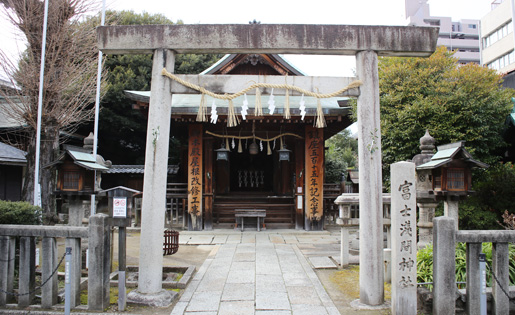 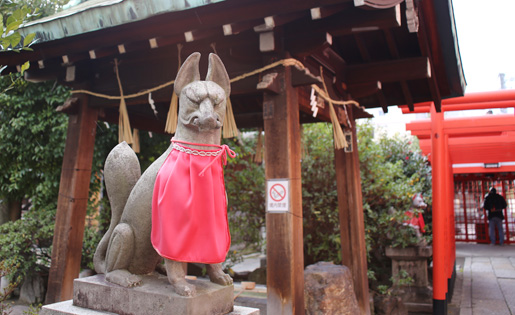 Fuji Hongu Sengen Shrine by order of Emperor Go-Tsuchimikado in 1495. The present shrine was built by Takahara-in, the wife of the first lord of the Owari domain, Yoshinao Tokugawa.

Originally, it was considered the township shrine of Seijuin, which has the famous Yanagishimizu water, one of the three best waters in Owari. However, Seijuin was abolished as a result of the abandonment of Buddhism in the Meiji era, and only Fuji Sengen Shrine remains today. 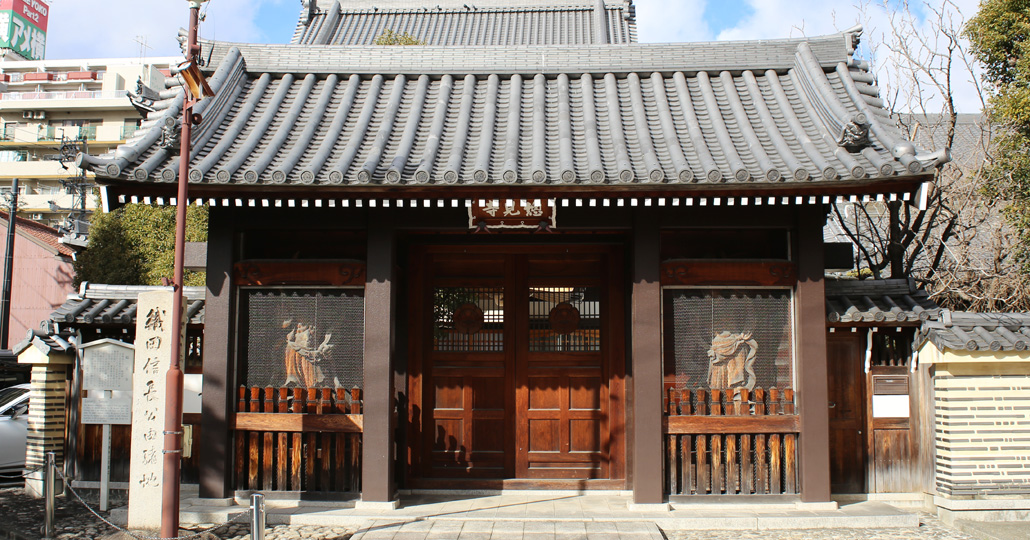 Nobuo Nobunaga, the second son of Nobunaga Oda, moved Ankokuji Temple in Oshima Village, Ise Province, to Kiyosu to mourn his father's loss, and renamed it Somi-ji Temple. The temple was relocated to its present location in Osu when it moved over Kiyosu.

Nobunaga's tomb is located there, and a memorial service is held every year on June 2, the anniversary of Nobunaga's death. Nine temple treasures, including portraits of Nobunaga and Nobuo and relics, have been designated as cultural assets by Aichi Prefecture.

Before the name "Osu" became a place name, it was called Monzenmachi or Uramonzenmachi, and this "gate" refers to the gate of Souken-ji Temple.

※The temple is not open for worship at all times. 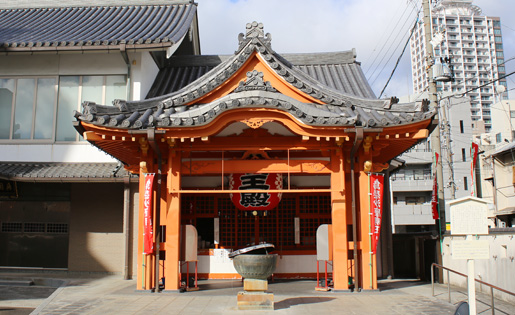 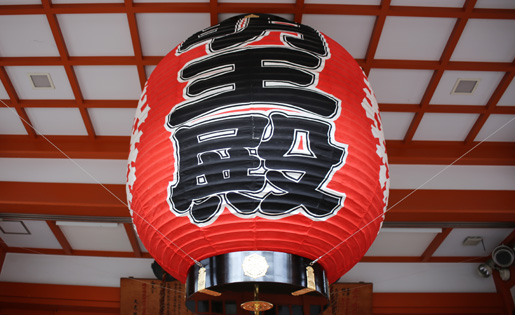 Built in Kiyosu in the first year of Keicho. Moved to Osu at the time of Kiyosu-koshi. Akamon Dori is named after the vermilion-lacquered gate of Daikoin. The original gate was lost in a fire during the Kyoho period and in the war, but was rebuilt in 1966.

The principal object of worship at Myouoden, Wusuma Myoo, is a Buddha who is said to have the power to purify all evils and defilements in the world. It is said to be beneficial for diseases of the lower part of the body, especially those peculiar to women, and was therefore believed by the women who lived in the brothels in Osu when they were there.

Nicknamed "Myouon-san," the temple is crowded with people on the 28th of every month. 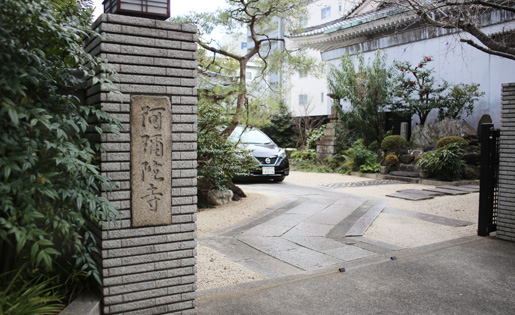 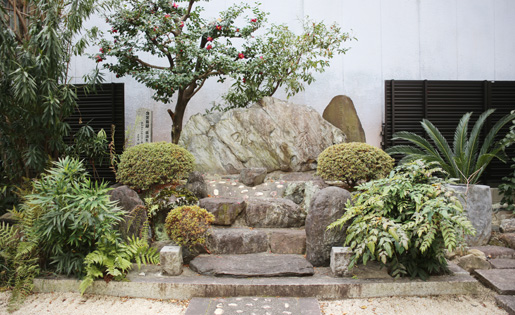 Created during the Tianwen period (1532-1554).
The temple is a branch temple of Chion-in of the Jodo sect, and moved to Osu when Kiyosu-goshi was completed. Based on a record of various entertainments that appeared in the precincts of shrines and temples in the Osu area, "Mise-en-scene Zoshi" written by Tamaaki Kodera, in December 1968, to commemorate the flourishing of rakugo and storytelling in the Edo period, storytelling enthusiasts, Meigei Mutual Aid Association, Rakugo Association, Japan Art Association (now Rakugo Art Association) and Kamigata Rakugo Association established the " A mound of "spitting mounds" was erected.
Every December, a memorial service for deceased comical storytellers who came to Nagoya and a dedication East-West Rakugo performance are held. 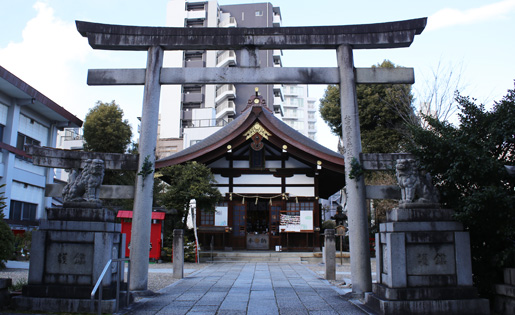 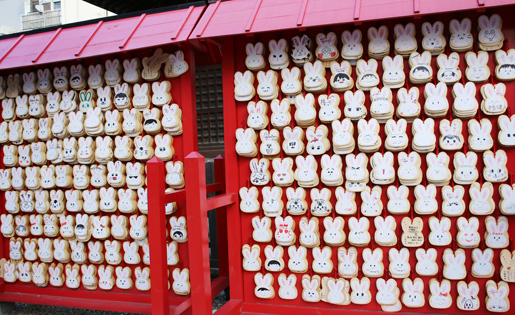 The shrine was founded in the Genki era (1570-1572) and was recommended by the Ogami Shrine in Nara Prefecture.
There is an unusual torii called "Miwa-torii" or "Mitsu-torii" with side torii on either side of the center, and it is said that if you pass through it in the figure of eight, your blessings will be tripled.
The deity is Ohmononushi (one with Okuninushi), who is famous for the myth "Inaba no Shirousagi (White Rabbit of Inaba)." In reference to this story, a statue of a "Happy Rabbit" is placed in front of the worship hall, and petting this rabbit is believed to bring good luck.
On the 8th of each month, the Daikoku-ko Festival is held. 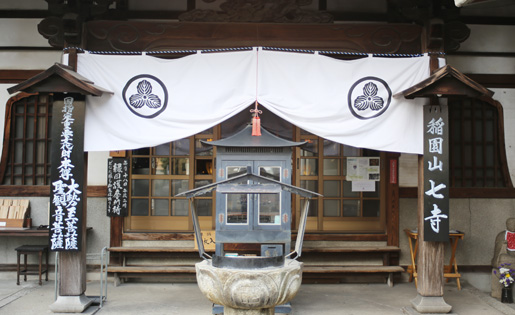 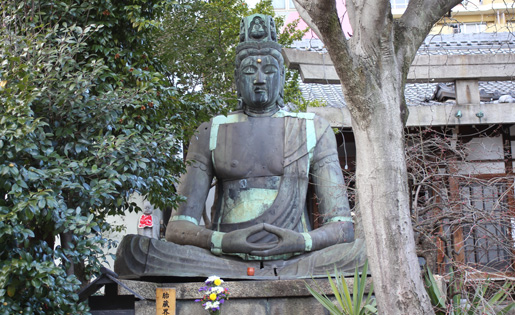 The building was destroyed by fire in the war, leaving only one sutra storehouse. The two statues of Kannon and Seishi, which barely escaped the fire, as well as the Tang-nyu-iru Ichi-kyo Sutra, are designated as National Important Cultural Properties. The statue of Dainichi Nyorai in the precincts of the temple remains in a scarred state, testifying to the severity of the war.

The Osu Torinoichi is held on the day of the rooster in November every year, and is crowded with people who want to buy lucky rakes. The market is also crowded every year with people who wish for good fortune by "burning" old rakes and amulets to express their gratitude. 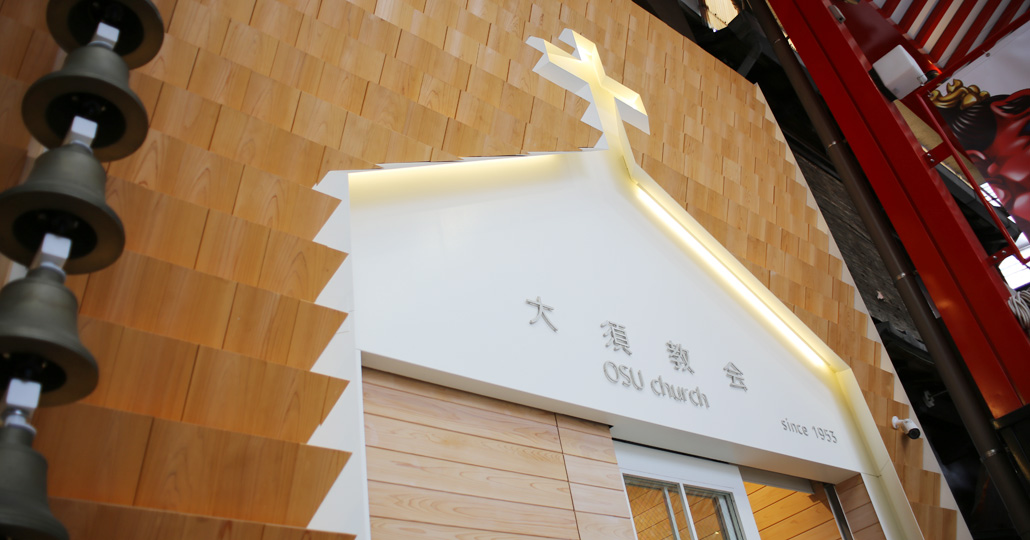 The Osu Church, with the sound of carillon and the scent of cypress, has been walking alongside the Osu shopping district since 1953! This is the only Christian church in the shopping arcade in Japan!
Carillon plays famous hymns and seasonally different songs every hour from 11am to 6pm. Please come and listen to the melody created by the sound of the bells!