■Setsubune
Held annually on February 3 at Osu Kannon and Banshoji Temple.
Setsubun refers to the day on which each season is divided. Since the Edo period (1603-1867), the day before Risshun (around February 4) has generally been called Setsubun.
The present 'mamemaki' or bean-throwing ceremony is based on the annual ritual of 'Tsuina' held at court to drive away ogres on the lunar new year's eve, which had been held since the early Heian period (794-1185). 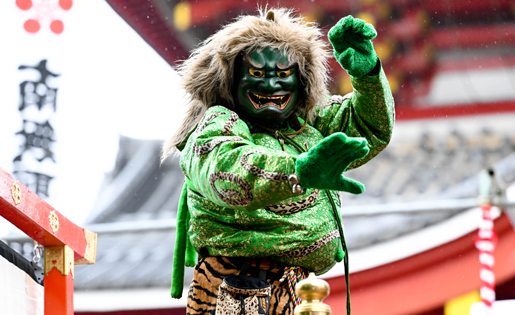 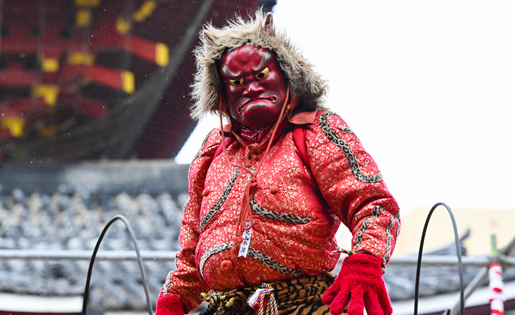 Setsubun Hosen matrix
Held annually on February 3.
In honor of Osu Kannon's fair day on the 18th, a procession of treasure ships leaves Sakae Ko Ko Koen in Sakae at 1:18 p.m. It passes through Minami-Otsu Dori into the Osu shopping district. After a break in front of Banshoji Temple, the procession heads for Osu Kannon. The procession includes not only ogres, but also the god of fortune, the seven gods of good fortune, treasure ships, and musicians. A large number of people parade through the town. 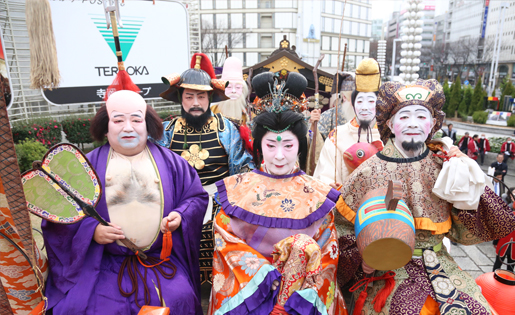 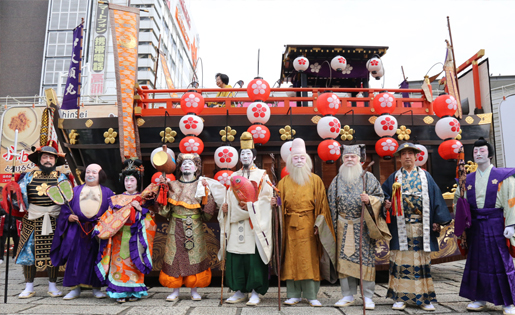 Horse tower (children's portable shrine)
Held every second Saturday or Sunday in May.
Osu Kannon's "Horse Tower" is held on May 18, originating from "Tango no Running Horse," in which horses are pulled and run on May 5 at Atsuta Shrine. As a shopping street event, it is held every year on the second Sunday in May so that children can participate. Local children carry a horse-headed portable shrine and parade through the shopping street while praying for their physical health.
The "Horse Tower" is said to have originated from a festival called "Umakake Matsuri," a traditional festival in the Owari and Nishi Mikawa regions, and is an old festival that is mentioned in "Owari Meisho Zue" (a geographical magazine of Owari Province published from the late Edo period to the Meiji period) as being held at the Osu Kannon. When Nobunaga Oda returned triumphantly to Kiyosu Castle after winning the Battle of Okehazama, the villagers were delighted to hear the news of his victory and gathered at the castle. This led to the "Umakake Matsuri," a procession of decorated horses and horses running around the grounds of shrines and temples in the center of the village during the festival, which began in various parts of Owari and Nishi Mikawa.
In the Edo period (1603-1867), the festival shifted to the dedication of horses decorated with luxurious harnesses to shrines and temples, with tags and offerings called "dashi" (a kind of sacred staff) erected in appreciation for a good harvest, rain-making, and so on.
The white horse appears in the "Horse Pagoda" of Osu Kannon, which comes from an anecdote about a white horse that appeared out of nowhere to protect the temple treasures when the Osu Kannon suffered flood damage before it was relocated by Kiyosu Goshi.
In the Edo period (1603-1867), many towns and geigiren (geisha) under Nagoya Castle participated, and successive feudal lords visited to see the event. The "horse tower" in Osu was very crowded with many participants and spectators. 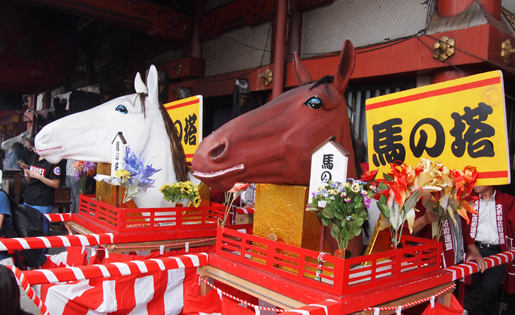 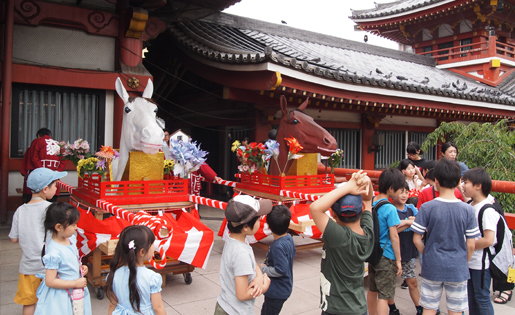